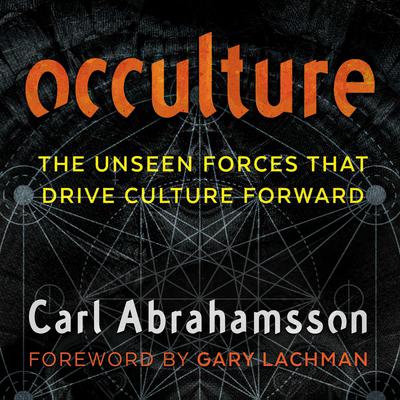 • Explores the history of magic as a source of genuine counter culture and compares it with our contemporary soulless, digital monoculture

Art, magic, and the occult have been intimately linked since our prehistoric ancestors created the first cave paintings some 50,000 years ago. As civilizations developed, these esoteric forces continued to drive culture forward, both visibly and behind the scenes, from the Hermetic ideas of the Renaissance, to the ethereal worlds of 19th century Symbolism, to the occult interests of the Surrealists.

In this deep exploration of “occulture”--the liminal space where art and magic meet--Carl Abrahamsson reveals the integral role played by magic and occultism in the development of culture throughout history as well as their relevance to the continuing survival of art and creativity. Blending magical history and esoteric philosophy with his more than 30 years’ experience in occult movements, Abrahamsson looks at the phenomena and people who have been seminal in modern esoteric developments, including Carl Jung, Anton LaVey, Paul Bowles, Aleister Crowley, and Rudolf Steiner.

Showing how art and magic were initially one and the same, the author explores the history of magic as a source of genuine counter culture and compares it with our contemporary soulless, digital monoculture. He reveals how the magic of art can be restored if art is employed as a means rather than an end--if it is intense, emotional, violent, and expressive--and offers strategies for creating freely, magically, even spontaneously, with intent unfettered by the whims of trends, a creative practice akin to chaos magick that assists both creators and spectators to live with meaning. He also looks at intuition and creativity as the cornerstones of genuine individuation, explaining how insights and illuminations seldom come in collective forms.

Exploring magical philosophy, occult history, the arts, psychology, and the colorful grey areas in between, Abrahamsson reveals the culturally and magically transformative role of art and the ways the occult continues to transform culture to this day.

Carl Abrahamsson--that curator and champion of everything in occulture that is cool, edgy, trendy, and artsy--inspires us with this mind-expanding collection of essays: meditations on art, magick, sex, psyche, and society that collectively trace the supernatural’s proclivity to cross over from counterculture to mainstream, casting light on how we see and understand our world. Not to be missed!” —
Through this collection of articles, essays, talks, and miscellanea, Carl Abrahamsson emerges as a dedicated communicator who shares concepts, histories, and ideas with insight and imagination. Whether exploring the culture of Thee Temple ov Psychick Youth or the philosophies of Crowley, Steiner, Jung, and Paul Bowles, Abrahamsson’s work is never less than engaging.” —
A welcome collection of insightful essays on the acculturation of society from the veteran chronicler of countercultures.” —
Carl Abrahamson’s Occulture is itself a beautiful example of the phenomena it discusses. Erudite and a pleasure to read, the collected essays have the potential to nudge consciousness beyond the ordinary perspective of culture and history. A necessary read for students of culture or magick.” —
A sharp, frank, and level-headed exploration of some of the most important figures and movements on the current edges of occultism. Highly recommended.” —
Occulture is a word that was inevitable. During the hyperactive phase of Thee Temple Ov Psychick Youth in the 1980s we were casting around for an all-embracing term to describe an approach to combining a unique, demystified, spiritual philosophy with a fervent insistence that all life and art are indivisible. At any given moment our sensory environment is whispering to us, telling us hidden stories, revealing subliminal connections. This concealed dialogue between every level of popular cultural forms and magical conclusions is what we named ‘occulture.’ Carl Abrahamsson takes this rendering of an innate cultural dynamic and exposes a multitude of parallel creative Universes that do that thing. So easy to perceive with hindsight but so invisible to the closed mind, he changes our means of perception--turning a straight line into an intricate spider’s web of possibilities and impossibilities combined. He performs magick; he concretizes meaning and brings forth revelation into his carefully focused vision.” —
These days, too much occult discourse comes off as grandiose, needlessly arcane, or desperately darker-than-thou. But decades of participant observation on the art-magic-transgression beat have given Carl Abrahamsson a more down-to-earth approach. Streamlining Crowley, LaVey, and postpunk chaos magic, these talks and essays offer up accessible, pragmatic, and psychologically savvy takes on the intuitive potentials of creative individuation. This is not another ‘system’ but sparkplugs engineered for your own magical engine.” —
Occulture is one of today’s most learned, unexpected, and illuminating tours through occult cultural influences. Carl Abrahamsson will expand your doors of perception of what the counterculture really is. His chapter on Anton LaVey came to me as a revelation. I am filled with hope that a book like this can be published at a time like ours.” —