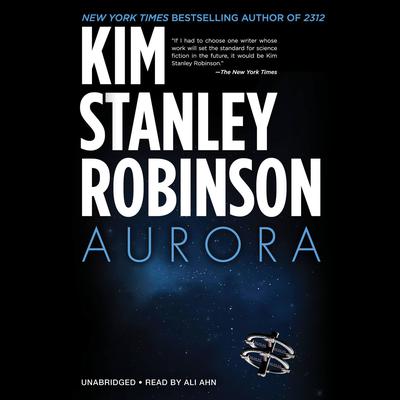 A major new novel from one of science fiction's most powerful voices, Aurora tells the incredible story of our first voyage beyond the solar system. Brilliantly imagined and beautifully told, it is the work of a writer at the height of his powers. Our voyage from Earth began generations ago. Now, we approach our destination. A new home. AURORA.

A BuzzFeed Books Pick for Best Science Fiction of 2015

Finalist for the 2015 Locus Award for Best Science Fiction Novel

A major new novel from one of science fiction's most powerful voices, Aurora tells the incredible story of our first voyage beyond the solar system.

Brilliantly imagined and beautifully told, it is the work of a writer at the height of his powers.

Our voyage from Earth began generations ago.

Now, we approach our destination.

Inherently epic stuff... expect interplanetary strife, conspiracies, more big ideas than most SF authors pack into a trilogy... [yet] this is ultimately in so many respects a book about Earth... a wise and wondrous novel —SFX on 2312
Intellectually engaged and intensely humane in a way SF rarely is, exuberantly speculative in a way only the best SF can be, this is the work of a writer at or approaching the top of his game. —Iain M. Banks on 2312
Robinson's extraordinary completeness of vision results in a magnificently realized, meticulously detailed future in which social and biological changes keep pace with technological developments. —Publishers Weekly on 2312
2312 is a monumental tour-de-force that re-imagines the solar system in ways no one has envisioned before. Whether comparing the compositions of Beethoven to those of skylarks and warblers, or describing a life-threatening sunrise on Mercury, Robinson fills 2312 with joy and exuberance, danger and fear, and the steadily mounting suspense of a mystery that spans the planets. This is the finest novel yet from the author who gave us the Mars Trilogy and GALILEO'S DREAM. An amazing accomplishment. —Robert Crais
In his vibrant, often moving new novel, 2312, Robinson's extrapolation is hard-wired to a truly affecting personal love story. [...] Perhaps Robinson's finest novel, 2312 is a treasured gift to fans of passionate storytelling; readers will be with Swan and Wahram in the tunnel long after reaching the last page. —LA Times
"[A] heart-warming, provocative tale.” —Scientific American
This ambitious hard SF epic shows Robinson at the top of his game... [A] poignant story, which admirably stretches the limits of human imagination. —Publishers Weekly on Aurora
“[A] compelling plot, with its near-perfect marriage of the technical and the psychological and with its (mostly) endearing cast of characters…and the absolutely delightful and radically essential ship computer itself.” —NPR
"Aurora…breaks us out of our well-ingrained, supremely well-rehearsed habits of apocalypse—and lets us see the option of a different future than permanent, hopeless standoff.” —Los Angeles Review of Books
“This ambitious hard SF epic shows Robinson at the top of his game…admirably stretches the limits of human imagination.” —Publishers Weekly (starred review)
“A compelling…argument against those who still dream of an interstellar manifest destiny.” —Kirkus Reviews (starred review)
“This is hard SF the way it’s mean to be written: technical, scientific, with big ideas and a fully realized society.” —Booklist
“Ali Ahn narrates the many dense and fascinating passages with the clipped and dispassionate tone of a computer—a style that makes complete sense since the story’s main character is ‘The Ship’s’ computer…Sci-fi at its best.” —AudioFile

Kim Stanley Robinson is a bestselling author and winner of the Hugo, Nebula, and Locus awards. He is the author of more than twenty books, including the bestselling Mars trilogy and the critically acclaimed Forty Signs of Rain, The Years of Rice and Salt, and 2312. In 2008, he was named a “Hero of the Environment” by Time magazine, and he works with the Sierra Nevada Research Institute. For his book Antarctica, he was sent to the Antarctic by the US National Science Foundation as part of their Antarctic Artists and Writers’ Program.