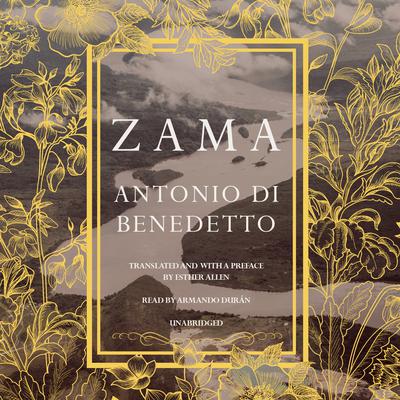 First published in 1956, Zama is now universally recognized as one of the masterpieces of modern Argentine and Spanish-language literature.

Shortlisted for the 2017 National Translation Award

First published in 1956, Zama is now universally recognized as one of the masterpieces of modern Argentine and Spanish-language literature.

“How fortunate we are to finally have this classic of twentieth-century Argentine literature in English…Esther Allen’s superb translation captures the remarkable atmosphere and existential anguish of di Benedetto’s masterwork.” —National Translation Award Committee
“As with novels by Kafka, Camus, Sartre, and Beckett, the story’s preoccupation is the tension between human freedom and constraining circumstance…The belated arrival of Zama in the United States raises an admittedly hyperbolic question: Can it be that the Great American Novel was written by an Argentinean?” —New Yorker
“[Di Benedetto] has written essential pages that have moved me and that continue to move me.” —Jorge Luis Borges, Edgar Award–winning author
”Read it above all for the triumph of its style…It’s Sartre by way of J. Peterman, and in Esther Allen’s translation it still feels unique and alive.” —Paris Review Daily
"Zama remains the most attractive of Di Benedetto’s books, if only because of the crazy energy of Zama himself, which is vividly conveyed in Esther Allen’s excellent translation.” — New York Review of Books
“An existential masterpiece and one of the great novels of the Spanish language, Zama is Antonio di Benedetto’s most famous—and, arguably, his best—work.” —Latin American Review of Books
“This year’s release of Antonio Di Benedetto’s masterpiece is a literary event of great importance, and it puts an end to an unjust historical neglect.” —Publishers Weekly (starred review)

Antonio Di Benedetto (1922–1986) was born in Mendoza, Argentina. He began his career as a journalist, writing for the Mendoza paper Los Andes. In 1953 he published his first book, a collection of short stories titled Mundo Animal. Zama was his first novel, followed by El Silenciero, Los Suicidas, and Sonbras, Nada Más. Over the course of his career, he received numerous honors, including a 1975 Guggenheim Fellowship and decorations from the French and Italian governments, and he earned the admiration of such well-known writers as Jorge Luis Borges, Julio Cortázar, and Roberto Bolaño. In 1976 Di Benedetto was imprisoned and tortured by Argentina’s military dictatorship. After his release in 1977, he went into exile in Spain. He returned to Buenos Aires in 1984 and died less than two years later.