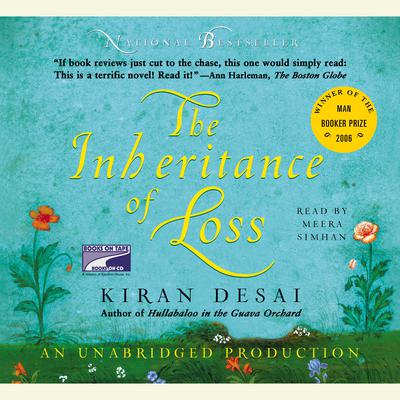 The Inheritance of Loss

In a crumbling, isolated house at the foot of Mount Kanchenjunga in the Himalayas lives an embittered judge who wants only to retire in peace, when his orphaned granddaughter, Sai, arrives on his doorstep. The judge’s cook watches over her distractedly, for his thoughts are often on his son, Biju, who is hopscotching from one gritty New York restaurant to another. Kiran Desai’s brilliant novel, published to huge acclaim, is a story of joy and despair. Her characters face numerous choices that majestically illuminate the consequences of colonialism as it collides with the modern world.

Winner of the 2006 Man Booker Prize

Winner of the 2006 National Book Critics Circle Award for Fiction

The 2007 AudioFile Best Audiobook of the Year

Shortlisted for the 2007 Orange Prize for Fiction

An ALA Notable Book Finalist for Fiction

In a crumbling, isolated house at the foot of Mount Kanchenjunga in the Himalayas lives an embittered judge who wants only to retire in peace, when his orphaned granddaughter, Sai, arrives on his doorstep. The judge’s cook watches over her distractedly, for his thoughts are often on his son, Biju, who is hopscotching from one gritty New York restaurant to another. Kiran Desai’s brilliant novel, published to huge acclaim, is a story of joy and despair. Her characters face numerous choices that majestically illuminate the consequences of colonialism as it collides with the modern world.

“Impressive…A big novel that stretches from India to New York; an ambitious novel that reaches into the lives of the middle class and the very poor; an exuberantly written novel that mixes colloquial and more literary styles; and yet it communicates nothing so much as how impossible it is to live a big, ambitious, exuberant life…Desai’s prose becomes marvelously flexible…Always pulsing with energy.” —Guardian (London)
“With her second novel, Kiran Desai has written a sprawling and delicate book, like an ancient landscape glittering in the rain…Desai has a touch for alternating humor and impending tragedy that one associates with the greatest writers, and her prose is uncannily beautiful, a perfect balance of lyricism and plain speech.” —O, The Oprah Magazine
“An astute observer of human nature and a delectably sensuous satirist…Perceptive and bewitching…Desai is superbly insightful in her rendering of compelling characters, and in her wisdom regarding the perverse dynamics of society…Incisively and imaginatively dramatizes the wonders and tragedies of Himalayan life and, by extension, the fragility of peace and elusiveness of justice, albeit with her own powerful blend of tenderness and wit.” —Booklist (starred)
“Stunning…In this alternately comical and contemplative novel, Desai deftly shuttles between first and third worlds, illuminating the pain of exile, the ambiguities of post-colonialism, and the blinding desire for a ‘better life’ when one person’s wealth means another’s poverty.” —Publishers Weekly
“An endearing view of globalization…The Inheritance of Loss is a book about tradition and modernity, the past and the future—and about the surprising ways both amusing and sorrowful, in which they all connect…A wide variety of readers should enjoy.” —Independent (London)
“It’s a clash of civilizations, even empires…The idea of an old empire, the British one collides against the nouveaux riche American one. The story ricochets between the two worlds, held together by Desai’s sharp eyes and even sharper tongue…This is a…substantial meal, taking on heavier issues of land and belonging, home and exile, poverty and privilege, and love and the longing for it.” —San Francisco Chronicle
“If book reviews just cut to the chase, this one would simply read: This is a terrific novel! Read it!” —Boston Globe
“One of the most impressive novels in English of the past year, and I predict you’ll read it…with your heart in your chest, inside the narrative, and the narrative inside you.” —Chicago Tribune
“[An] extraordinary new novel…lit by a moral intelligence at once fierce and tender.” —New York Times Book Review
“[An] exceptionally talented writer…She doesn’t falter…penning a book that is wise, insightful, and full of wonderfully compelling and conflicted characters…The Inheritance of Loss distinguishes her as a writer of note…A deft and often witty commentary on cultural issues…Abundant with illuminating detail and potent characters…With its razor insights and emotional scope The Inheritance of Loss amplifies a developing and formidable voice.” —Los Angeles Times
“Desai’s Indian characters are exquisitely particular—funny but never quaint, full of foibles but never reduced by authorial condescension. Bittersweet, entertaining, and just shy of tragic, The Inheritance of Loss is surprisingly wise.” —Economist
“Shimmering with honesty and humanity…This novel is finely accomplished.” —Seattle Times
“Lush, multi-textured…The lyrical prose invites rumination and rereading.” —Milwaukee Journal Sentinel
“A finely textured story that mixes post-Raj dilemmas of modern India with the challenges of Indian immigrant life in New York.” —Philadelphia Inquirer
“Desai’s strength lies in her ability to capture, with humor and grace, the nuanced complexities of the characters and their times…[A novel] that brings both caring and understanding.” —Denver Post
“[Desai’s] is an incredibly unromantic vision, and seldom has an author offered so fearless a glimpse into how ordinary lives are caught up in the collision of modernity and cultural tradition.” —Elle
“Vast and vivid, full of tastes and smells, voices and accents, humor and fury. It is a captivating book.” —Washington Times
“In keeping with the confident touch displayed throughout this rich, beguiling tale, the final scene treats the heart to one last moment of wild, comic joy—even as it satisfies the head by refusing to relinquish the dark reality that is the life of the characters…It is a work full of color and comedy, even as it challenges all to face the same heart-wrenching questions that haunt the immigrant…Nothing sours the warm heart at the center of this novel. Desai is sometimes compared to Salman Rushdie, and the energy and fecundity of imagination in her works do make them somewhat akin to his. But the tenderness in her novels is all her own.” —Christian Science Monitor
“Desai’s assurance and energy keep the plot on track and bring her ambitious tale to a fittingly strong conclusion.” —People
“A meditative look at the conflicting bonds of love and duty.” —Vogue
“Desai writes with assurance and lyricism about life in India, and her insights into how South Asia has been affected by America are fascinating and timely. This is an impressive, original novel from a welcome new voice in Indian fiction.” —BookPage

Kiran Desai was born in India and was educated in India, England, and America. She is the author of the critically acclaimed Hullabaloo in the Guava Orchard and The Inheritance of Loss, which won the Man Booker Prize in 2006.