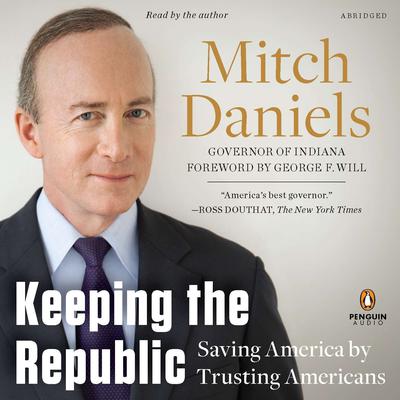 Unabridged, 9 hours Read by TBD "America's best governor" (Ross Douthat, The New York Times) offers a plan for limited but effective government, before it's too late.

"America's best governor" (Ross Douthat, The New York Times) offers a plan for limited but effective government, before it's too late.

"A principled but practical conservative who respects the intelligence of voters and would rather get something done than score political points. — Steven Pearlstein, The Washington Post
"He does not tweet...But he is good at one thing in particular: governing. — The Economist
"Mitch is the only one who sees the stark perils and will offer real detailed proposals...He would be the anti-Obama. — Former Florida Governor Jeb Bush —
"[Daniels is] the rare politician telling it like it is...I would pay cash money to watch him debate Obama on these issues, and I suspect the Republic would be much the better for it. — Joe Klein, Time
"The onetime Reagan White House political director and Bush White House budget chief is not your run-of-the-mill intellectual. His style is to be down- home, but his record of accomplishment is dazzling. — David S. Broder, The Washington Post
"He's one of the brightest governors in America. — New Jersey Governor Chris Christie
Governor Daniels has emerged as one of our nation's leading voices for reform and common sense in government. —Speaker of the House John Boehner