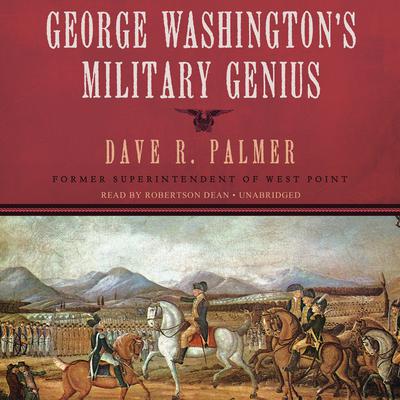 Confronting the critics who say Washington’s battlefield success and ultimate victories were a function of luck, George Washington’s Military Genius proves why Washington deserves the title of America’s preeminent strategist.

“Too often George Washington gets dismissed as little more than a bumbling but lucky military leader. Not so, says distinguished military historian Dave R. Palmer in his compelling volume. Palmer shows in convincing fashion how Washington showed courageous flexibility in formulating the strategy that would bring the rebellious Americans victory in their War for Independence. From beginning to end, George Washington’s Military Genius makes for gripping reading…Highly recommended!” —James Kirby Martin, author of the award-winning Benedict Arnold, Revolutionary Hero: An American Warrior Reconsidered
“Palmer, historian and former superintendent of West Point, makes a convincing case that America is free, united, and governed by civilians because of Washington’s strategic foresight and tactical brilliance.” —Publishers Weekly
“Dave Palmer rightly portrays General George Washington as a shrewd and effective commander-in-chief who understood better than anyone—American or British—the connection between political goals and military operations during the American Revolutionary War. Palmer’s superb history is clearheaded and insightful—anyone interested in the art of war at the strategic level will find this thoughtful book indispensible.” —Colonel Lance Betros, head of the Department of History, West Point
“Too many Americans—including scholars—downplay Washington’s military leadership, implying he was just the right man at the right place. General Palmer demonstrates once and for all that Washington had a strategy to win the war, and the determination to survive against all odds.” —James C. Rees, president of the Mount Vernon Ladies’ Association

David R. Palmer is a former superintendent of West Point, a retired lieutenant general of the US Army, a two-tour veteran of Vietnam, and an accomplished military historian. A frequent commentator in television documentaries on the Revolutionary War, he is the author of numerous books.