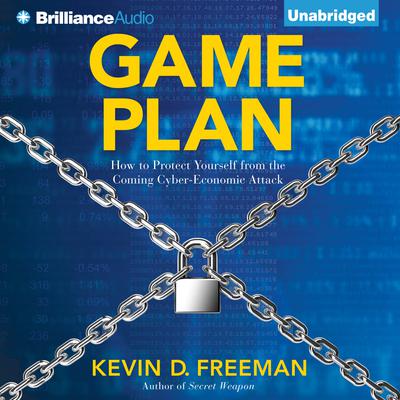 Game Plan: How to Protect Yourself from the Coming Cyber-Economic Attack

Game Plan is the first "how to" investment handbook of its type. It will explain the emerging risks and provide a complete game plan of response for investors at all levels. Freeman will explain that there is no "one size fits all" solution as events are happening quickly and the challenges can morph suddenly. Just as a football team must plan for a variety of offensive strategies and attacks, investors must be prepared to strategically adjust. This audiobook provides the game plan to respond and succeed. In Game Plan you'll learn… • The proper use of gold in your investment strategy • How stocks should be deployed in your investment portfolio • The smart way to diversify your portfolio • How to decrease your bond holding vulnerability • How to judge a guarantor in guaranteed investments • How to avoid falling into the marketing hype for Hedge Fund scams • How to find a properly trained investment advisor • How to advance wealth at the individual level • How to win the global economic war

Game Plan is the first "how to" investment handbook of its type. It will explain the emerging risks and provide a complete game plan of response for investors at all levels. Freeman will explain that there is no "one size fits all" solution as events are happening quickly and the challenges can morph suddenly. Just as a football team must plan for a variety of offensive strategies and attacks, investors must be prepared to strategically adjust. This audiobook provides the game plan to respond and succeed.

“America’s political and military leaders may be ignoring our economy’s vulnerability to foreign attack, but our enemies aren’t. The information in Game Plan is essential for protecting your family from the devastation that economic warfare would bring. Being the messenger for this kind of warning may not be much fun, but I can’t think of anyone better than Kevin Freeman to ring the bell.” —Glenn Beck
“The threat of financial terrorism is very real, and nobody knows that threat more thoroughly than Kevin Freeman. In this book, he’ll tell you how to deal with the possibility of financial collapse, and give you hope for the future, too.” —Ben Shapiro, New York Times bestselling author of Bullies: How the Left’s Culture of Fear and Intimidation Silences America
“No one has done more to warn our government about the threat of financial terrorism than Kevin Freeman. His new book Game Plan provides a clear strategy for Americans to follow in order to protect themselves against an inevitable attack. If Washington continues its dysfunction, it will become even more essential for average citizens to know how to defend their finances.” —Congressman Steve Stockman
“Kevin Freeman is a national treasure. His ability to synthesize economic and national security is unsurpassed—and of incalculable importance in the conflict of our time: the War for the Free World.” —Frank Gaffney, president and founder, Center for Security Policy
“Game Plan is an important look at one of the most significant threats to US security: cyber attacks and other efforts designed to cripple the economy. Must reading for those interested in protecting national security.” —Bill Gertz, senior editor of the Washington Free Beacon and national security columnist at the Washington Times
“Kevin Freeman understands the threat of financial terrorism as well as anyone. You’d have to be negligent to ignore his timely advice about protecting your family from the economic attacks that are clearly on the horizon.” —Frank Keating, president and CEO, American Bankers Association, former governor of Oklahoma
“As Kevin Freeman points out, America is facing a global economic war which has direct threats for your family, your job, and your life savings. Yet, despite his five-year effort to warn Washington, willful blindness appears to be at work, preventing our leadership from protecting you. Reading Game Plan will provide the hidden truth about the economic threats targeting you and provide you the actionable steps you should take to protect your family.” —Lt. Gen. William G. “Jerry” Boykin (USA, Ret.), former commander of Special Forces Command and the Green Berets

Kevin Freeman, CFA, is the founder and CEO of Freeman Global Investment Counsel. In 1990, he wrote a business plan for Sir John Templeton and was hand-picked by him to help build the Templeton Private Client group, which managed nearly $2.5 billion in global markets within a decade. One of the world’s leading experts on economic warfare and financial terrorism, he authored the report “Economic Warfare: Risks and Responses” for the Department of Defense in 2009 and has briefed members of Congress, US senators, and past and present members of the CIA, DIA, FBI, SEC, Homeland Security, Justice Department, and state and local law enforcement. He has appeared in the international media, including CNBC, Fox News, Glenn Beck, the Counter Terrorist, the Washington Times, and the UK’s Daily Mail and Times of London.