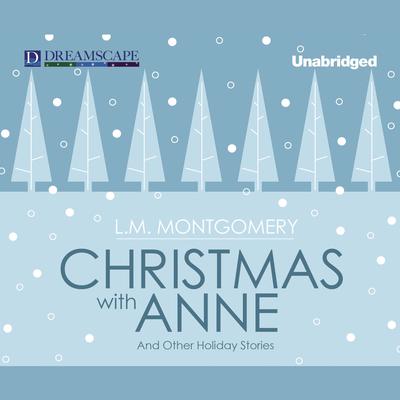 Christmas with Anne: and Other Holiday Stories

The story of Anne Shirley has endured generation after generation and catapulted L. M. Montgomery into the ethos of literature. Here, Dreamscape presents a collection of holiday stories featuring Anne and other characters.

“These holiday stories…all provide satisfying plots and personal insights.” —Midwest Book Review
“[These stories are] as heartwarming as those set at Green Gables and beyond, and Montgomery’s fans are always ready for any new story that can be mustered from this fabled author’s pen.” —Kirkus Reviews

Lucy Maud Montgomery was born on November 30th, 1874, in Clifton, Prince Edward Island, Canada. Although she lived during a time when few women received a higher education, Lucy attended Prince Wales College in Charlottestown, PEI, and then Dalhousie University in Halifax. At seventeen she went to Halifax, Nova Scotia, to write for a newspaper, the Halifax Chronicle, and for its evening edition, the Echo. But Lucy returned to live with her grandmother in Cavendish, PEI, where she taught and contributed stories to magazines. It was this experience, along with the lives of her farmer and fisherfolk neighbors, that came alive when she wrote her Anne books, beginning with Anne of Green Gables (1908). Anne of Green Gables brought her overnight success and international recognition. It was followed by eight other books about Anne and Avonlea, as well as a number of other delightful novels, including her Emily series, which began in 1923 with Emily of New Moon. But it is her delightful heroine Anne Shirley, praised by Mark Twain as “the most moving and delightful child of fiction since the immortal Alice,” who remains a popular favorite throughout the world. She and her husband, the Rev. Ewen MacDonald, eventually moved to Ontario. Lucy Montgomery died in Toronto in 1942.