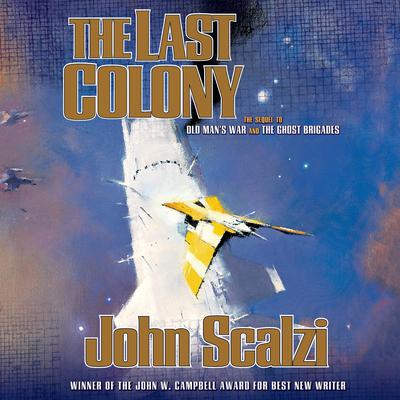 Retired from his fighting days, John Perry is now village ombudsman for a human colony on distant Huckleberry. With his wife, former Special Forces warrior Jane Sagan, he farms several acres, adjudicates local disputes, and enjoys watching his adopted daughter grow up. That is, until his and Jane's past reaches out to bring them back into the game — as leaders of a new human colony, to be peopled by settlers from all the major human worlds, for a deep political purpose that will put Perry and Sagan back in the thick of interstellar politics, betrayal, and war. The highly-anticipated conclusion to John Scalzi's SF trilogy begun with Old Man's War and The Ghost Brigades concludes with The Last Colony

Finalist for the 2008 Hugo Award for Best Novel

That is, until his and Jane's past reaches out to bring them back into the game — as leaders of a new human colony, to be peopled by settlers from all the major human worlds, for a deep political purpose that will put Perry and Sagan back in the thick of interstellar politics, betrayal, and war.

Scalzi is a natural heir to Heinlein, and his second book in this series is a good old-fashioned space opera, which takes time to question the nature of free will. —St. Louis Press-Dispatch on The Ghost Brigades
In Heinleinesque fashion, the book is loaded with scenes of comradeship, isolation, ruthlessness and the protocols, which govern the lives of active-duty soldiers. But this is where Scalzi, famous for his blog ‘The Whatever,' surpasses Heinlein. Scalzi weaves in subtle discussions of humanity's growing fear of aging and our simultaneous attraction and repulsion to the Frankenstein-like creatures we are able to create. —San Antonio Express-News on The Ghost Brigades
Astonishingly proficient. —Publishers Weekly (starred review) on Old Man's War
Top-notch. His combat scenes are blood-roiling. His dialogue is suitably snappy and profane. And the moral and philosophical issues he raises... insert useful ethical burrs under the military saddle of the story. —The Washington Post on Old Man's War
Smartly conceived and thoroughly entertaining, Old Man's War is a splendid novel. —Cleveland Plain-Dealer
Fast and deep…I like the galaxy this author's playing in, the characters he limns, the situations he's playing with, and I'm glad there's at least one more volume on the way. —San Diego Union-Tribune on The Ghost Brigades
An impressive piece of work. —Philadelphia Inquirer on The Ghost Brigades
“The Last Colony will kick your butt across the galaxy and make you care. —Rick Kleffel, The Agony Column, on The Last Colony
Scalzi's captivating blend of off-world adventure and political intrigue remains consistently engaging. —Booklist on The Last Colony
The sequel to Old Man's War combines taut military action with keen insights into the moral issues revolving around developing technologies. Scalzi has a finely tuned sense of balance between personal drama and the 'big picture' ... Highly recommended. —Library Journal (starred review) on The Ghost Brigades
A mix of Starship Troopers and Universal Soldier, Ghost evokes awakening, betrayal, and combat in the best military sci-fi tradition. —Entertainment Weekly on The Ghost Brigades
“Scalzi’s captivating blend of off-world adventure and political intrigue remains consistently engaging.” —Booklist
“Fantastic, eminently readable, and more than a little bittersweet…Perry is a likably sarcastic narrator whom readers should find both sympathetic and amusing. The plot is beautifully constructed, and the resolution of the series is heart stopping in its absolute rightness.” —RT Book Reviews (4½ stars, Top Pick!)

John Scalzi is a popular and acclaimed science-fiction author whose debut Old Man’s War won him science fiction’s John W. Campbell Award for Best New Writer. His New York Times bestsellers include Fuzzy Nation, Lock In, and Redshirts, which also won the 2013 Hugo Award for Best Novel. He also writes nonfiction on subjects ranging from personal finance to astronomy to film. He served as the creative consultant for the Stargate: Universe television series.