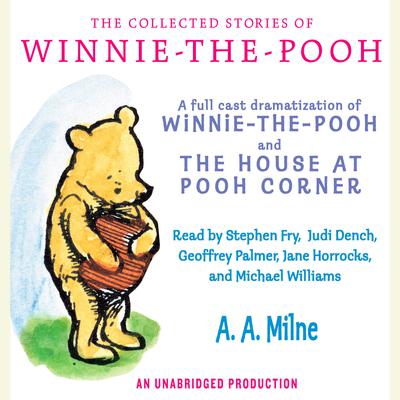 The Collected Stories of Winnie-the-Pooh

By A. A. Milne
Performed by Stephen Fry , Dame Judi Dench , and a full cast

“A superb ensemble cast including Judi Dench, Stephen Fry, and Geoffrey Palmer gives full dramatic treatment to twenty stories from the world of Pooh. Fry captures the essence of the silly old bear, and Palmer is the consummate melancholic Eeyore. A splendid introduction to these classic tales for a new generation.” —School Library Journal

Alan Alexander Milne (1882–1956) was the son of a Scottish schoolmaster. Milne won a scholarship to Westminster School and later read mathematics at Cambridge. His real interest was in lighthearted writing; he edited the undergraduate magazine Granta and at twenty-four he became assistant editor of Punch. After serving as a signals officer in World War I he won additional acclaim as a playwright. His great success, however, came as a writer of children’s literature after publishing a series of verses about his young son Christopher Robin (When We Were Very Young and Now We Are Six). Following the acclaim received for the Winnie-the-Pooh books, Milne published several novels as well as an autobiography, It’s Too Late Now (1939).