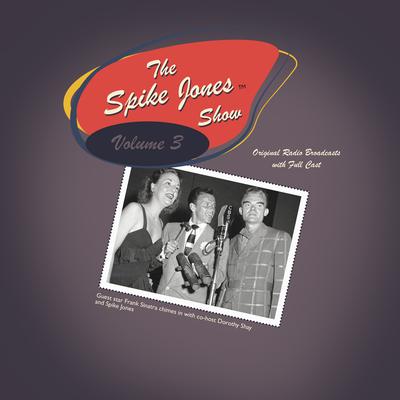 By Spike Jones
Performed by a full cast

This volume of The Spike Jones Show features episodes emanating from Las Vegas, Pueblo, Colorado, and Calipatria, California—where Spike grew up and started his first band—but most of the programs here were broadcast from Hollywood. The guest list reflects the change in locale.  Frank Sinatra, Gene Kelly, Peter Lorre (vocalizing “My Old Flame” with impressionist Paul Frees in tow), Don Ameche (doing “Quartet from Rigor Mortis”), Dinah Shore and Fred Astaire (performing “Cheek to Cheek”), Jerry Colonna, and Basil Rathbone are among those heard here. The show’s $5,000 budget had little impact on the guest list. “All those big stars loved doing The Spike Jones Show,” said staff writer Eddie Brandt. “They all wanted to get into a City Slicker number with Spike.” The stars were doubly appreciated by servicemen who heard abbreviated shows on Armed Forces Radio. Big-band crooner Buddy Clark, singer Morton Downey Sr., the “Irish Nightingale,” the Delta Rhythm Boys, an African American quintet who endured for more than 50 years, and Lina Romay, vocalist for the Xavier Cugat band (who sings “Tico Tico”) are among other guest artists here, alongside regulars like singer Dorothy Shay and comedian Doodles Weaver.

For more on Spike and the City Slickers and their radio days, see my book Spike Jones Off the Record: The Man Who Murdered Music (from BearManor Media) on Amazon, Barnes & Noble, and elsewhere.

Lindley Armstrong “Spike” Jones was an American musician and bandleader. His band played ballads and classical pieces that would be punctuated by gunshots, whistles, and other sound effects.