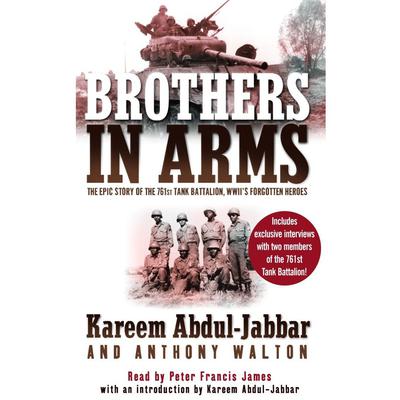 A powerful wartime saga in the bestselling tradition of Flags of Our Fathers, Brothers in Arms recounts the extraordinary story of the 761st Tank Battalion, the first all-black armored unit to see combat in World War II.

A powerful wartime saga in the bestselling tradition of Flags of Our Fathers, Brothers in Arms recounts the extraordinary story of the 761st Tank Battalion, the first all-black armored unit to see combat in World War II.

A touching profile of men who fought overt and subtle racism for the chance to prove their mettle, and a poignant reminder of the unreasonable prejudices of that era that almost kept them on the sidelines. —Sacramento Bee
An inspirational, moving account of courage and comradeship on the part of exceptional men. —Military History
Not only an exciting, informative military history for the general reader but also a revealing and moving record of racism in America’s past. —Houston Chronicle
A slam dunk . . . Well written, well researched and an excellent read . . . Abdul-Jabbar does an incredible job of weaving [the personal stories] into the context of the war as it unfolded. —Pittsburgh Post-Gazette
A brilliant and moving narrative that through its imagery helps the reader appreciate the hardness of battle. —Charlotte Observer
More than a combat story or a segregated version of Stephen Ambrose's Band of Brothers. It's also the story of how black soldiers had to fight (literally and figuratively) for the right to fight the Germans. —USA Today
A wholly different perspective on the ‘greatest generation.’ —People (Critic's Choice)
A carefully researched and engrossing account that paints the individual dramas of the tankmen against the backdrop of the war . . . A fine tribute to these unsung heroes and a valuable addition to the literature on African American service in World War II. —Washington Post Book World

Kareem Abdul-Jabbar is the NBA’s all-time leading scorer and a Basketball Hall of Fame inductee. Since retiring, he has been an actor and basketball coach and has authored six books for adults and three for children, including What Color Is My World?, which won the NAACP award for Best Children’s Book. In 2012, he was selected as a US cultural ambassador, and in 2016 he was awarded the Presidential Medal of Freedom, the nation’s highest civilian award which recognizes exceptional meritorious service.