By Joyce Carol Oates
Read by a full cast

Eight highly diverse works from one of America’s most prolific and versatile authors, this collection includes an exclusive dramatization of Oates’ bestselling novel American Appetites; two comedic plays, The Perfectionist and The Truth Teller; four short stories, “Gulf War,” “Black,” “The Key,” and “Tone Clusters;” as well as her libretto for Black Water: An American Opera, composed by John Duffy.

“Black” (one-act play): In this evening of cocktails and dinner, a couple anxiously awaits the arrival of an ex-husband. As the wine glasses are drained, the evening becomes dark and intense, revealing the true colors of the characters in this eerie love triangle.
Cast: Stephanie Dunnam, Rif Hutton, and Joe Spano.

“Gulf War” (one-act play): An affluent young couple entertains an older couple for an evening of cocktails and politics during the Gulf War. But as the evening continues, the conversation takes a bizarre and absurd tone.
Cast: Edward Asner, Stephanie Dunnam, Nan Martin, and Joe Spano. 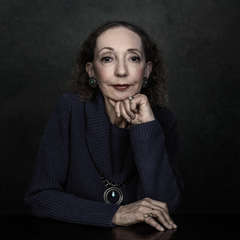 Joyce Carol Oates, an award-winning author of fiction, nonfiction, short stories, plays, and novellas, is the author of some of the most enduring fiction of our time, including two New York Times bestsellers. Her books have won the National Book Award, O. Henry Award, the Jerusalem Prize, and the National Humanities Medal, among others. Her work has been nominated for the Pulitzer Prize several times. She has been a member of the American Academy of Arts and Letters since 1978.