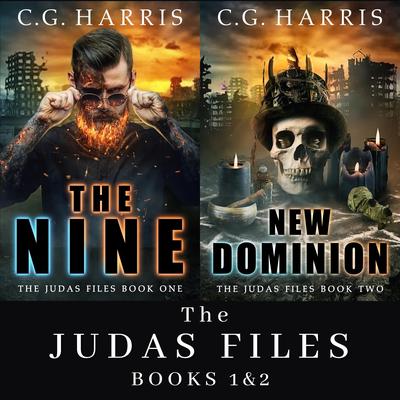 THE NINE: Gabe has carved a successful niche into his arctic afterlife, but when Judas Iscariot makes him an offer he doesn't dare refuse, Gabe must leave behind his black-market Twinkies and bootleg Dr. Peppers to become a double agent for the most dangerous organization the world has never heard of. Easier said than done, especially when his skill set is limited to irritating quips and an eye for button-fly jeans. To make matters worse, his new partner, Alex, is a beautiful, hard-as-nails agent who wants nothing to do with him.

Gabe must figure out how to work with Alex, stop a deadly pathogen from being released Topside, and do it without botching the mission or revealing his true identity. If this unlikely hero can’t figure it out before disaster strikes, facing the wrath of Hell will be the least of his worries…

NEW DOMINION: Underworld double agent Gabe Gantry can’t stop screwing up. But trying to commit covert good deeds from inside Hell is a devilishly tricky balancing act. Especially when his latest agency gig sends him Topside for something suspiciously non-Satanic. Being a double agent in the Underworld is never simple, but a gig that doesn’t involve preventing the next apocalypse would be a breath of fresh air. But Gabe knows better. There has to be a catch.

If this unlikely hero can’t figure it out before disaster strikes, facing the wrath of Hell will be the least of his worries…

"A great Hell-based romp in the style of Sandman Slim meets the X-Files, this well-paced supernatural adventure weaves a variety of story threads into a colorful tapestry that will leave the reader both satisfied and ready for more."