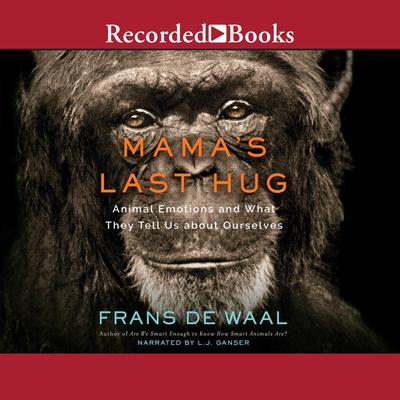 Longlisted for the 2020 Andrew Carnegie Medal for Excellence in Nonfiction

A 2020 Audie Award Finalist for Best Narration in Nonfiction

A #1 Amazon.com bestseller in Zoology and Primatology

“Makes us think long and hard about the true nature of animal emotions.” —Desmond Morris, #1 New York Times bestselling author
“After you’ve read Mama’s Last Hug, it becomes obvious that animals have emotions. Learn how they resemble us in many ways.” —Temple Grandin, New York Times bestselling author
“Game-changing…For too long…animal emotions were simply ignored. But nothing could be more essential to understanding how people and animals behave.” —New York Times Book Review
“Through colorful stories and riveting prose, de Waal firmly puts to rest the stubborn notion that humans alone in the animal kingdom experience a broad array of emotions.” —NPR
“Moving, often funny, and almost always eye-opening.” —Science News
“De Waal is a skilled storyteller, and…turns his years of research into a delightful and illuminating read for nonscientists.” —Kirkus Reviews (starred review)
“In de Waal’s engaging inquiry, we roam the animal kingdom as he makes his most important point: we animals share the same emotions, just as we share the same organs.” —Booklist (starred review)
“De Waal’s masterful work of evolutionary psychology will leave both fellow academics and intellectually curious lay readers with much food for thought.” —Publishers Weekly (starred review)
“Narrator L. J. Ganser’s conversational delivery perfectly matches author-primatologist de Waal’s easygoing style…Ganser wisely honors the author’s storytelling approach to this complex subject, allowing his own enthusiasm and wonder to shine through. Through hearing examples of apes sharing a sense of humor and elephants being self-aware and imaginative, listeners will discover just how similar we are to fellow mammals.” —AudioFile
“Applying wide-ranging examples, from primates to schools of fish, he skillfully illustrates that emotions are an essential part of intellect for all species.” —Library Journal

Frans de Waal, PhD, is a biologist and ethologist, world-renowned for his work on the social intelligence of primates. He has been named one of Time magazine’s 100 Most Influential People and is the author of numerous books, including The Ape and the Sushi Master, which was named a New York Times Notable Book, Our Inner Ape, and Peacemaking among Primates, winner of the Los Angeles Times Book Award. He is a Charles Howard Candler Professor of Primate Behavior at Emory University and the director of the Living Links Center at the Yerkes National Primate Center in Atlanta.