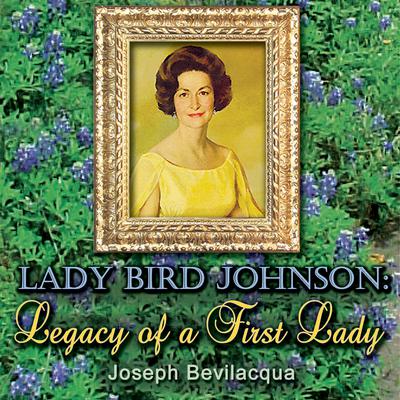 As heard on Sirius XM Radio and NPR stations!

LadyBird Johnson: Legacy of a First Lady was written, produced, directed, andnarrated by veteran NPR producer Joe Bevilacqua. One of the most licensedaudiobooks on The Public Radio Exchange and iTunes, it is Bevilacqua’s award-winningaudio documentary examining the challenges and achievements of thisextraordinary woman. The hour combines never-before-released archive audiogleaned from thousands of hours of recordings from the Lyndon Baines JohnsonLibrary and Museum, period news broadcasts, private conversations with LyndonBaines Johnson, and the words of Lady Bird Johnson from an interview that hasnever before been released to the public.

“Lady Bird Johnson: Legacy of a First Lady, written, narrated, and produced by Joe Bevilacqua, is a love letter to a woman admired not only by her fellow Texans but also by the world. The one-hour program was among four winners in the best documentary category at the New York Festivals.” —Austin American-Statesman
“Informational, inspiring. This is an excellent, uplifting journey through Lady Bird Johnson’s life and her growth and transition to First Lady under tragic conditions. It’s wonderful to hear her voice, rendered here in excerpts from interviews she’s given and speeches she’s made. It is especially poignant to hear a portion of her first audio diary entry, made the day after JFK’s assassination. Nuanced choices of music are a production plus, but the strength is in the spoken word. Wisely chosen excerpts create a rich experience. The hour contains a wide range of voices, from historians to those who worked with her or know her, and they pinpoint her influence on LBJ, and on the capital, and the nation—particularly in the areas of environment, race, and education. She truly is a force for good.” —Atlantic Public Media
“Lady Bird did such wonderful work. I really enjoyed hearing the backstory behind the Highway Beautification Act passed during the Johnson Administration.” —Lorie Kellogg

Joe Bevilacqua, also known as Joe Bev, is a public radio producer and radio theater dramatist. However, his career has taken him into every aspect of show business, including stage, film, and television as a producer, director, writer, author, actor, journalist, documentarian, and even cartoonist. He is also a member of the Metropolitan Opera Company in New York City.