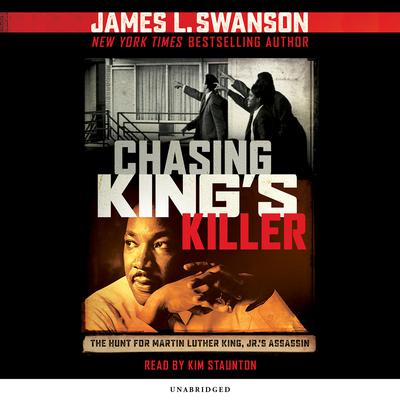 An astonishing account of the assassination of America's most beloved and celebrated civil rights leader, Martin Luther King, by NY Times bestselling author, James L. Swanson. NAACP Image Award Finalist Chicago Public Library Best Book of the Year Kirkus Reviews Best Young Adult Book of the Year * "[James L. Swanson's] masterful work... reveals, in gripping style, how one individual can impact history." --Booklist, starred review In his meteoric, thirteen-year rise to fame, Dr. Martin Luther King Jr. led a mass movement for Civil Rights -- with his relentless peaceful, non-violent protests, public demonstrations, and eloquent speeches. But as violent threats cast a dark shadow over Dr. King's life, Swanson hones in on James Earl Ray, a bizarre, racist, prison escapee who tragically ends King's life. As he did in his bestselling Scholastic MG/YA books Chasing LIncoln's Killer and "THE PRESIDENT HAS BEEN SHOT!", Swanson transports readers back to one of the most shocking, sad, and terrifying events in American history.

An ALA Top Book for the Year for Young Adults

A Booklist Best Book of the Year

As he did in his bestselling Scholastic MG/YA books Chasing LIncoln's Killer and "THE PRESIDENT HAS BEEN SHOT!", Swanson transports readers back to one of the most shocking, sad, and terrifying events in American history.

An ALA Best Book for Young Adults —
Archival photographs, explicit diagrams of the assassination scene, source notes, and a bibliography that includes conspiracy-focused literature add further value to this strong addition to Kennedy titles. —Booklist
Reads like a thriller, with intense pacing and an engaging narrative. —School Library Journal
Booklist Notable Children's Book —
Recommended as one of the top children's books about Lincoln byAmerican History Magazine —
* "The rich details and suspense are ever present . . . It is a tale of intrigue and an engrossing mystery. —School Library Journal, starred review
* "This account of Lincoln's assassination and the twelve-day search for his killer reads like a historical thriller. —Publishers Weekly, starred review
Swanson charms readers with mesmerizing, little-known facts, making readers the experts and inspiring them to become historians and inquirers. —VOYA Magazine
Swanson brings the same immediacy and thrillerlike tension he achieved inChasing Lincoln's Killer to this harrowing account of the Kennedy assassination. —Publishers Weekly
* "An absorbing chronicle of the lead-up to and aftermath of the assassination of an American leader... Riveting. —Publishers Weekly, starred review
* "....[James L. Swanson's] masterful work, akin to [his] previous success,Chasing Lincoln's Killer... takes on thriller pacing as it portrays, in alternating segments, King's ceaseless work with Ray's escape from prison and eventual plot to assassinate King.... This immersive history reveals, in gripping style, how one individual can impact history. —Booklist, starred review
* "Page-turning nonfiction that captures the tenor of the times with meticulous research and a trove of photographs. Exhaustive, exemplary backmatter further enhances the text. An important contribution to the understanding of a complex period in United States history that still reverberates today. —Kirkus Reviews, starred review
* "Detailed, well-organized, and vividly illustrated.... A top pick for YA history collections. —School Library Journal, starred review
This new title is a smash hit.... [Swanson's] action-packed pages are captivating.... I would hand this to any reader-from the seasoned to the reluctant. There is something in this book for everyone. —School Library Connection, highly recommended
A YALSA-ALA Excellence in Young Adult Nonfiction Award Finalist —
A must-purchase for library collections. —VOYA
NAACP Image Award NomineeChicago Public Library Best Book of the YearKirkus Reviews Best Young Adult Book of the Year2020 New Jersey Garden State Teen Book Award NomineeTexas Topaz Reading List Top Ten Title for NonfictionCybils Award Junion High Non-Fiction Finalist —

James L. Swanson is the Edgar Award-winning author of the New York Times bestseller Manhunt: The 12-Day Chase for Lincoln’s Killer. His other books include the acclaimed photographic history Lincoln’s Assassins: Their Trial and Execution, as well as Chasing Lincoln’s Killer, and adaptations of Manhunt and Bloody Crimes for young readers. Swanson was born on Lincoln’s birthday.