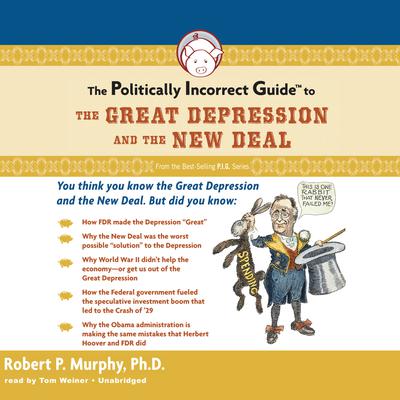 Obama isn't giving fireside chats (yet), and we're not waiting in breadlines, but to listen to the mainstream media, we're on the cusp of Great Depression 2.0 and Obama's "new New Deal" is the only thing that can save us. But here to remind us of the lessons that we should have learned isThe Politically Incorrect Guideto the Great Depression and the New Deal.

In this timely new PI Guide, economist Robert Murphy reveals the stark truth that free-market failure didn't cause the Great Depression and the New Deal didn't cure it. Shattering myths and politically correct lies, he tells why World War II didn't help the economy or get us out of the Great Depression, why it took FDR to make the Depression "great," and why Herbert Hoover was more like Obama and less like Bush than the liberal media would have you believe.

The Politically Incorrect Guide to the Great Depression and the New Deal is a modern-day fireside lesson in our past, current, and future economic history. Free-market believers and capitalists everywhere should have this on their bookshelves and in their briefcases.

“Murphy’s Politically Incorrect Guide to the Great Depression provides defenders of liberty the intellectual arsenal they need to counter the myth that capitalism caused, and government cured the Great Depression. Read this book and understand why massively increasing government is not change we can believe in.” —Congressman Ron Paul
“Today’s central planners cower from the truth about the Great Depression and the New Deal like Dracula before a crucifix. Robert Murphy eviscerates the fantasy version of these episodes that is used to justify destructive and idiotic policies today. You almost feel sorry for the propagandists while reading this book. Almost.” —Thomas E. Woods, PhD, New York Times bestselling author of Meltdown
“A thorough and impressive critique of FDR and the New Deal which should be required reading in all modern US history and economics courses. I highly recommend this insightful book.” —Burton W. Folsom, Jr., professor of history, Hillsdale College, and author of New Deal or Raw Deal?: How FDR’s Economic Legacy Has Damaged America
“Murphy explains in insightful fashion why the conventional wisdom is neither conventional nor wisdom. He is not only a good economist but can turn the reader into a good economist.” —Gary Wolfram, William Simon Professor of Economics and Public Policy, Hillsdale College
“Murphy’s splendid guide to the Great Depression and the New Deal is a clear, compelling account of an era that even most economists get wrong. Now that many people are clamoring for a return of the New Deal, you owe it to yourself to find out what such a sequel would entail. Murphy’s book is the best place to begin your quest.” —Robert Higgs, Senior Fellow in Political Economy, the Independent Institute

Robert P. Murphy is an economist who has worked in both academia and the private sector. After receiving his PhD from NYU in 2003, he taught economics at Hillsdale College. He has written articles for such scholarly journals as The Journal of the History of Economic Thought and The American Journal of Economics and Sociology and has written frequently for popular audiences on economics and politics. He works as an econometrician and lives in Nashville, Tennessee, with his wife and son.