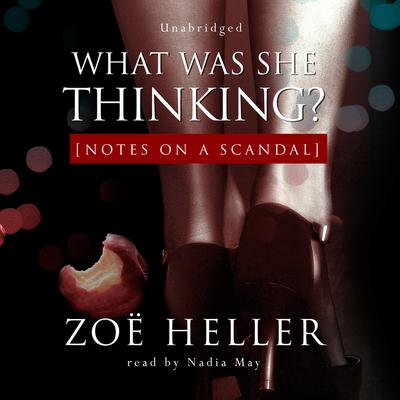 What Was She Thinking?: Notes on a Scandal

By Zoë Heller
Read by Nadia May

An Electric Literature Pick of 9 Toxic Friendships in Literature

A complex psychological portrait framed as a wicked satire, a story of passion and repression, mercy and betrayal

Schoolteacher Barbara Covett has led a bitter, lonely life as a self-made careerist. Sheba Hart is the ethereal, inexperienced new pottery teacher at St. George’s school. When Barbara hears of Sheba’s problems in the classroom, her sympathy soon leads to friendship and confidence.

But Barbara is unprepared for the secret she will learn: that Sheba has begun a passionate affair with an underage male student. Barbara’s confusion, disapproval, and jealousy are helpless to prevent the coming disaster.

When the story comes to light and Sheba falls prey to the inevitable media circus, Barbara decides to write an account in her friend’s defense, an account that reveals not only Sheba’s secrets but her own. What results is a complex psychological portrait framed as a wicked satire, a story of passion and repression, mercy and betrayal.

“Nadia May is Barbara—self-deluding, jealous, controlling, snide though always civil. May gives voice to subordinate characters as well…Dame Judi Dench plays Barbara in the movie (Notes on a Scandal); it’s difficult to imagine she does it any better than this audio portrayal. Winner of the AudioFile Earphones Award.” —AudioFile
“Heller elevates a tabloid-worthy tale of obsession into an intense, witty, literary page-turner.” —Entertainment Weekly
“Equally adroit at satire and at psychological suspense, Heller charts the course of a predatory friendship and demonstrates the lengths to which some people go for human company.” —New Yorker
“Deliciously perverse, laugh-out-loud funny [with] caustic wit and needle-sharp observations. The reader looks on, amused and aghast, as both unlikely seductress and her self-deluding protector become locked in a helpless embrace of need and betrayal.” —Vogue
“Gripping from start to finish; Heller brings vivid, nuanced characterizations to the racy story.” —Publishers Weekly
“Both a penetrating character study and a sharp examination of voyeurism, Heller’s novel is utterly brilliant.” —Booklist

Zoë Heller was born in London and lives in New York City. She is the author of the novels What Was She Thinking? (Notes on a Scandal), The Believers, and Everything You Know.