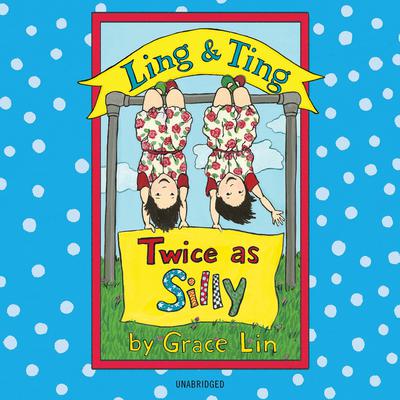 Ling & Ting are twins. They like to be silly. They like to tell jokes. Most of all, they like to laugh together. Laugh with Ling & Ting! The beloved twins from the Geisel Honor book Ling & Ting: Not Exactly the Same! and Ling & Ting Share a Birthday are back to share their favorite funny stories with beginning readers. This collection of six laugh-out-loud stories is sure to tickle the funny bone of fans and new readers alike.

The beloved twins from the Geisel Honor book Ling & Ting: Not Exactly the Same! and Ling & Ting Share a Birthday are back to share their favorite funny stories with beginning readers. This collection of six laugh-out-loud stories is sure to tickle the funny bone of fans and new readers alike.

“Those irrepressible twins are back with more sweetly goofy antics in a third installment of the easy reader series. Six short chapters deliver on the title’s promise; each episode unfolds with pitch-perfect comedic timing, ending with a chuckle-worthy (and decidedly silly) punch line…The girls’ lives are grounded in realistic childhood experiences, embellished with their creative imaginings…Though each chapter can be enjoyed on its own, the various threads come together in the last chapter when the sisters co-create their own story—a book within the book. Fans of Ling and Ting will be delighted to see a few nods to previous adventures, while new readers will want to get to know these funny sisters better. A winning addition to a delightfully fun series.” —School Library Journal (starred review)
“Listeners will chuckle as they enjoy the latest escapades of twins Ling and Ting. Whether it’s planting cupcakes in the garden, reading each other’s minds, painting toys with lucky red paint, or crafting a story that is not silly, listeners can count on encountering some child-friendly twists. Narrator Tara Sands capitalizes on each surprise. She’s forceful as Ting insists that she’ll try anyway after Ling has told her she needs seeds, not cupcakes, to plant in her garden. And she’s exuberant as Ling exclaims that she can swing higher than any tree or mountain or even the clouds. At the end, Sands slows and lowers her register as she concludes Ling and Ting’s jointly written story—a ‘very, very silly story,’ they say, that is ‘just like us.’” —AudioFile
“Adorable twin sisters Ling and Ting are as funny and fresh as ever in their third early reader…Ling and Ting take turns telling a story featuring two rabbits, a cupcake tree, a lucky red toy and mind reading…These twins make learning to read double the fun.” —Kirkus Reviews

Grace Lin is an award-winning illustrator and author of children’s books. Her novel Where the Mountain Meets the Moon was a Newbery Honor book and a New York Times bestseller. She is a recipient of the Literary Lights for Children Award and was an Astrid Lindgren Memorial Award nominee for the United States. She received her degree from the Rhode Island School of Design.